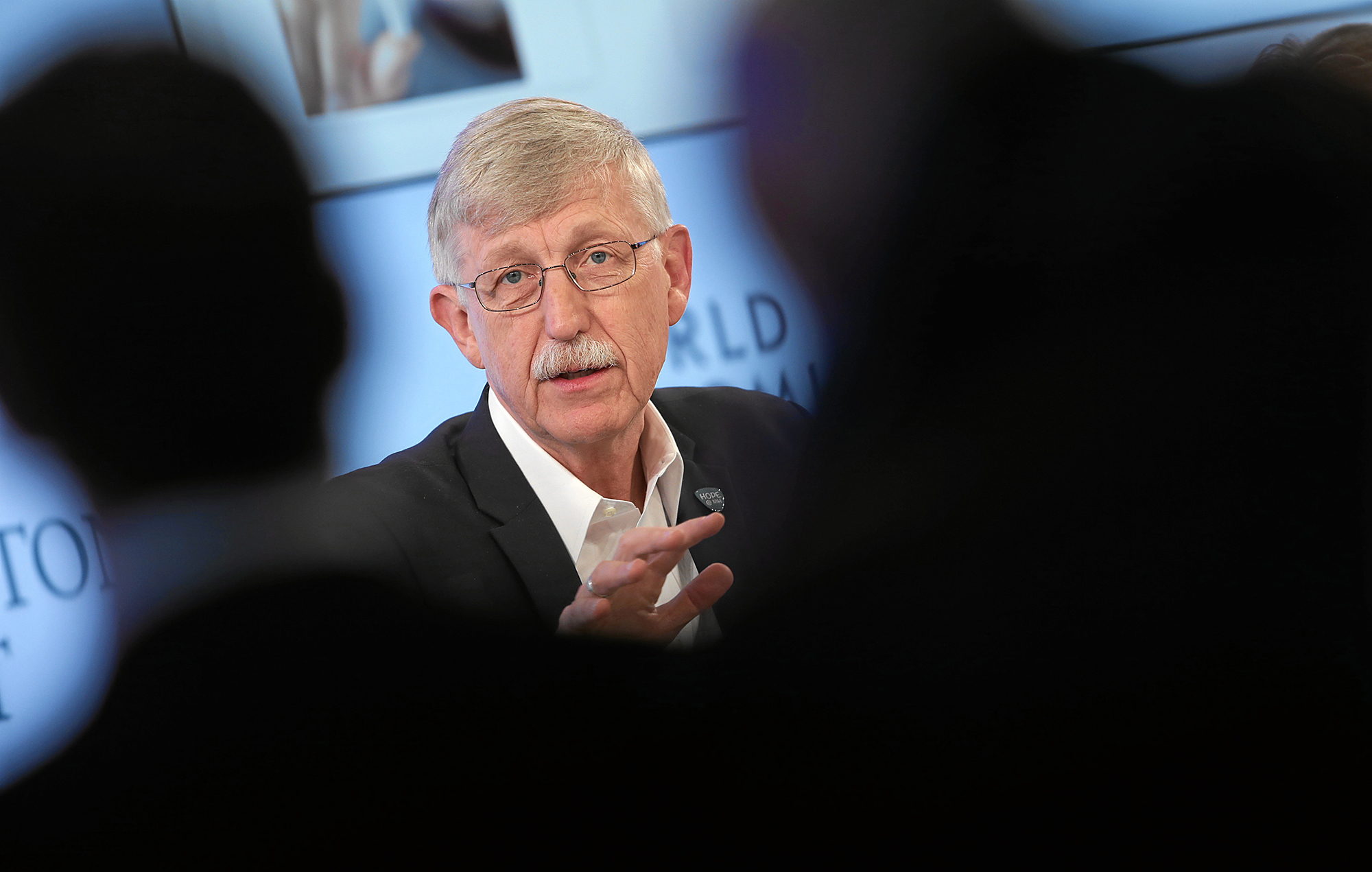 As a geneticist he has peered down a microscope and been the first person to see processes that previously only God knew about. As a physician he has been the last person to care for a dying patient. As a Christian Dr Francis Collins has a perspective on life and death.

In the early 1980s he became the first person to discover a single letter of the human genetic code that modulates production of foetal haemoglobin, the lack of which is a contributory factor to sickle-cell anaemia. In 1989 he led the team that discovered the genetic misspelling that causes cystic fibrosis. Four years later he became director of the National Human Genome Research Institute in America and headed an international race against time and commercial interests to sequence the 3.1 billion letters of the human genome.

On 26 June 2000 he stood beside Bill Clinton in the White House as the President pronounced the first survey of the human genome 90 per cent complete. ‘Today,’ said Clinton, ‘we are learning the language in which God created life.’

Is science, much of which seems to assume that there isn’t a God, irreconcilable with faith?

Some people see science and spirituality as opposing forces – somehow mutually inconsistent. They are not. I find them entirely complementary.

I don’t think science will ever be in a position to prove the existence of God. But I do think there are evidences that come out of science that point more towards than away from the existence of a creator God who cares about human beings.

Science has limits. There are huge questions science cannot answer, such as ‘Why did the Universe come into being?’, ‘Why are we here?’ and ‘What happens after we die?’

When you look down a microscope at the building blocks of life what evidence for God do you see?

The fact, for instance, that the Universe had a beginning (and big bang theory calls out for an explanation, because nature has not been observed to create itself) immediately draws the question of how that beginning came to be. At the time of this incredible explosion of matter and energy there must have been something outside nature that was capable of creating. And that ‘something’ sounds like God himself. 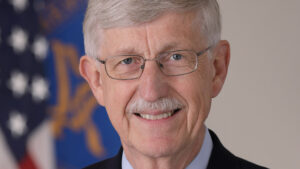 When you look at the fine-tuning of the Universe – the so-called anthropic principle – where you see how incredibly improbable it is that all of the constants that govern the behaviour of matter and energy were set at exactly the point at which some sort of stable life was possible, you can’t help but marvel and conclude that there was something more than happenstance behind the process to set those constants in just that precise way.

Then there’s the moral law, or ‘law of right behaviour’, which is present in humankind. We might argue about what is right and what is wrong but we all have a sense of right and wrong.

The moral law cannot be readily explained in terms of evolution because it sometimes calls us to do things that are really quite the opposite of what evolution would ask – like jump into a river to save a drowning stranger. The moral law has been fully set in the heart of only one species – humankind. There’s no bigger signpost towards the existence of a personal God.

How did you become a Christian?

I wasn’t raised in a faith tradition. As a child I was vaguely aware of the concept of God. My parents enrolled me in a church choir to learn music. I took to the music but not to the theology.

As a student, both at college and as a physical chemistry graduate student at Yale, it was convenient for me to walk away from any responsibilities other than the ones I chose for myself. I was surrounded by people in science who largely ignored any spiritual aspect of life, so I just ran with the crowd.

I was convinced that everything in the Universe could be explained by equations and physical principles. No thinking scientist, I concluded, could seriously entertain the possibility of God without committing intellectual suicide. I had gone from being an agnostic to an atheist. To me, faith was sentimental superstition.

But then I changed direction and went to medical school, and I started to encounter the reality of suffering and death in a much more up-close-and-personal way.

One afternoon an elderly patient with a terminal illness shared her faith w ith me and explained why this gave her comfort and peace as she saw the end of her life approaching. She turned to me and said: ‘Doctor, I’ve told you about my faith but you haven’t said anything. What do you believe?’

I had never been asked that question so directly. Suddenly I felt a great sense of unease that I didn’t have a good answer, that I had never seriously asked myself the question, that as a scientist I had never taken the time to look at the evidence for and against belief and had drawn a conclusion without having considered that evidence.

I started by visiting a Methodist minister. He listened to my confused questions and gave me a book to read. It was Mere Christianity by C. S. Lewis. As I read it I realised that all my arguments against the rationality of faith were those of a schoolboy. Lewis’s case for faith, which is something I had never encountered before, was extremely compelling.

I fought it. I didn’t want it to be true. I was reading the book to shore up my atheism, not to become a believer. But, as Lewis puts it, the ‘Hound of Heaven’ was after me.

I fought the evidence for almost two years.

When did the searching stop and the finding begin?

It became clear that I had to make a decision not only about whether to believe in God but also about what kind of God he was. I encountered the person of Jesus Christ as this remarkable figure in history who clearly was different from any other figure in any other faith.

Jesus claimed not only to know God but also to be God and to forgive sins, and he died on a cross in a way that took me a long time to understand.

Eventually it made the most beautiful, perfect spiritual sense. I realised that this was not just a story to walk away from. I had to reach my own verdict based on the evidence.

‘My moment of commitment came one autumn day while I was hiking in the Cascade Mountains. It was a beautiful afternoon and as I rounded a corner I unexpectedly saw a frozen waterfall, hundreds of feet high. The remarkable beauty of creation was overwhelming. I could no longer resist. I fell on my knees and asked Christ to be my saviour. My days of wilful blindness towards God were gone. The search was over.

Do you believe in the virgin birth, the resurrection and the second coming of Jesus?

Even though these things are outside scientific rationalism?

Yes. The main questions one has to ask oneself are whether you believe in a God who is outside nature, and whether you believe in Christ as divine. If you are willing to say yes to both of those questions – and I became unable to say anything but yes after considering all the pros and cons and feeling the spiritual tug in my heart – then the idea of these miracles is not really such a problem, even for a scientist.

If God is outside nature and is all-powerful there is no reason why he cannot occasionally stage an invasion of nature, which we would call a miracle, to get our attention.

There are scientists who conclude that some theories have a negative consequence for religion. Richard Dawkins, for instance, claims that evolution is necessarily atheistic. Is that the way you see it?

No. There are a number of areas where people are being asked to make a choice between either science or faith. Often the science involved is evolution. The atheistic approach, which Dawkins takes, claims that science trumps faith. To draw the conclusion that an acceptance of evolution requires an acceptance of atheism as a personal theology, as he does, is simply to go outside the evidence.

Evolution is an incredibly unifying approach to understanding the relationship of organisms. Study of DNA strongly supports Darwin’s proposal of descent from a common ancestor. By comparing the genomes of many different organisms we can see how this fits precisely with what one would expect if they had begun as a common ancestor and then diverged over very long periods of time.

Evolution says only how the process might have occurred. It doesn’t say a thing about why life is here. It doesn’t say much about whether our existence on this planet has a purpose beyond randomness. For those answers we must look beyond science.

The creationist view is that faith trumps science. It argues that evolution is a lie. It says that the relatedness of organisms as visualised by the study of DNA is simply a consequence of God having used some of the same ideas in his multiple acts of special creation.

Confronted with such facts as the similar ordering of genes across chromosomes between different mammalian species, or the existence of repetitive ‘junk DNA’ in shared locations along the DNA of humans and mice, they simply dismiss this as part of God’s plan.

Do you have a preferred personal view of the origins of the Universe?

I do not see it as a choice between faith in a personal God and science.

Many materialists, noting the advances of science filling in the gaps of our understanding, announce that God is dead. Many believers see the advance of science as dangerous and untrustworthy – a threat to God.

Both positions are dangerous and unnecessary. The God of the Bible is also the God of the human genome. He can be worshipped in the cathedral and in the laboratory.

God’s creation is majestic, awesome, intricate and beautiful. Creation cannot be at war with itself. Only imperfect humans start such battles. Only we can end them.

For me they can be blended without compromise through what is known as theistic evolution – what I prefer to call ‘Bios through Logos’ (Life through the Word), or just ‘BioLogos’.

Basically this says that God, who is unlimited by time or space, created the Universe and established the natural laws which govern it. He then chose evolution as the mechanism to create microbes, plants and animals.

God then intentionally chose the same mechanism to give rise to special creatures who would have intelligence, a knowledge of right and wrong, free will and a desire to seek him – humankind. He prepared the biological home for humanity by evolution, but then he filled it with the soul, the knowledge of right and wrong (the moral law) and free will.

God also knew that these creatures would ultimately choose to disobey the moral law, and thus the Fall would occur. His provision for this would be to send his Son, Jesus, to live, die and be raised for our salvation.