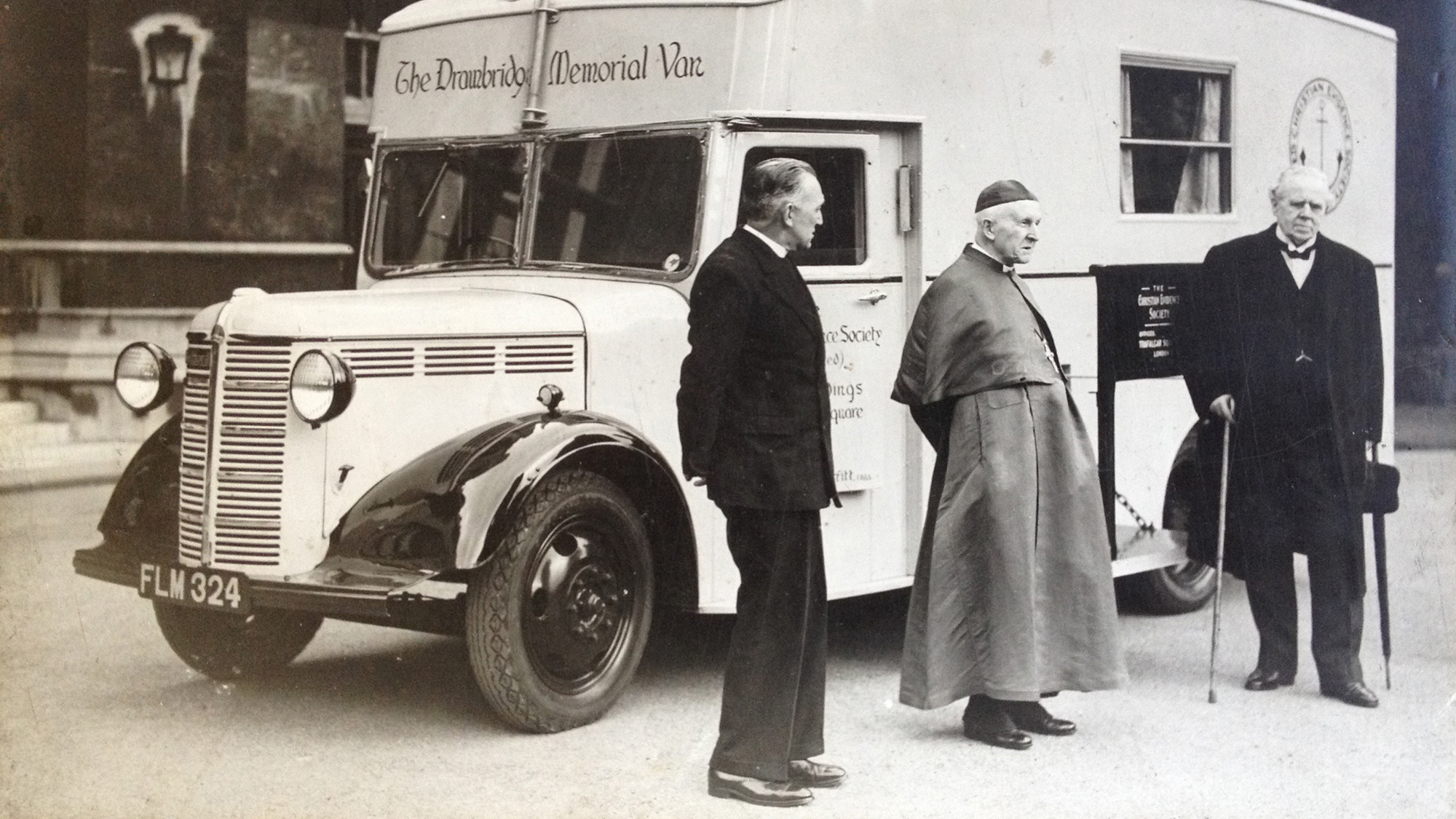 In the early years of the 20th century, a new Sunday afternoon entertainment came to Hampstead Heath in north London. Atheist and free-thinking speakers were standing in the open air and delivering lectures to crowds which often numbered hundreds of heckling, cheering and fascinated people. A local clergyman who saw the crowds, Rev. Cyprian Drawbridge, noticed the speakers were preaching their messages without any response by Christian speakers. It wasn’t long before he ventured out of his pulpit and onto the Heath, armed with his own lecture notes.

As he said later, ‘It is often asked by our Christian critics, Why don’t more men go to church? May we venture to ask another question? Ought not the Christian church to go to the men?’

This piece of forgotten history came to light when the granddaughter of Rev. Drawbridge sent an email to this blog last year to say that her grandfather’s scrapbooks, full of newspaper cuttings, had come down to her, and would we like to see them? Rev. Drawbridge had been one of the first secretaries of the Christian Evidence Society (which runs this website), and the scrapbooks open up the story of what he and others were doing to argue the case for the Christian faith, in often hostile surroundings, in the early decades of the 20th century. The society had been founded in the 1870s, but had not been involved in open-air speaking before, so Drawbridge’s initiative was a bold and creative departure.

An early clipping from July 1909 describes one of the open air debates in ‘a particularly high wind on Hampstead Heath’. The lecture was delivered by Drawbridge from ‘the box seat of a brake’, which was an open, horse-drawn carriage. The cutting reports: ‘It was fine to watch the interest of the crowd, their quickness in seizing points, their eager response to any telling home-thrust.’

Drawbridge and his fellow speakers were soon carrying out their mission using lectures, debates, booklets and pamphlets. In the summer, they staged open air speaking and debate on Parliament Hill and Hampstead Heath on Sunday afternoons. In the winter, they went indoors to give lectures, which the Guardian described as ‘sound and workmanlike’, plus speeches by opponents, in a hired hall in Tufnell Park. These Sunday night events, which included lectures on Christianity given by well-known authors, artists and actors, drew regular audiences of 500 people. One report said: ‘Though opposite views are emphatically expressed, the very best spirit prevails, and much good is done’. The lecture, questions and speeches were then turned into threepenny pamphlets.

We were fascinated to discover that the subject areas covered by Drawbridge and others in the lectures and booklets included: evolution, the authority of the Bible, the religious beliefs of scientists, evidence of design, the historicity of Christ, and the resurrection. All these are still hot issues in debates between atheists and Christians 100 years later, and they remain an important focus of this website and of the society.

Rev. Drawbridge died in 1937. A few years earlier, he received a very nice compliment from the Archdeacon of Middlesex, who asked: ‘How can you cross the gulf of ignorance that separates the desert of doubt from the castle of faith?’ His answer: ‘Use the Christian Evidence Society’s Drawbridge.’ One of the obituary notices said: ‘Some people feel that it is not worth while to argue with Atheists; but Mr Drawbridge always had an answer to that. The Christian Evidence Society’s voluntary lecturers include some of their one-time opponents.’

The cuttings books were very kindly donated by the family of Rev. Drawbridge to the Christian Evidence Society, and a few weeks ago we took them to the society’s archive in South London. While we were there, we looked up the collection’s photographs, and found some fascinating images of how the society got motorized in the 1940s, getting its message out with the help of a custom-built Bedford ambulance van. The van, which was named ‘The Drawbridge Memorial Van’, sported a small, fold-out pulpit, elevating speakers a couple of feet above their audience so they could be seen and heard. Other pictures revealed Canon Tom Scrutton, an army chaplain in World War I who became a famous pacifist, preaching on Tower Hill.

We’d like to say a warm thank-you to the family of Rev. Drawbridge for their contribution in documenting the history of the Christian Evidence Society.