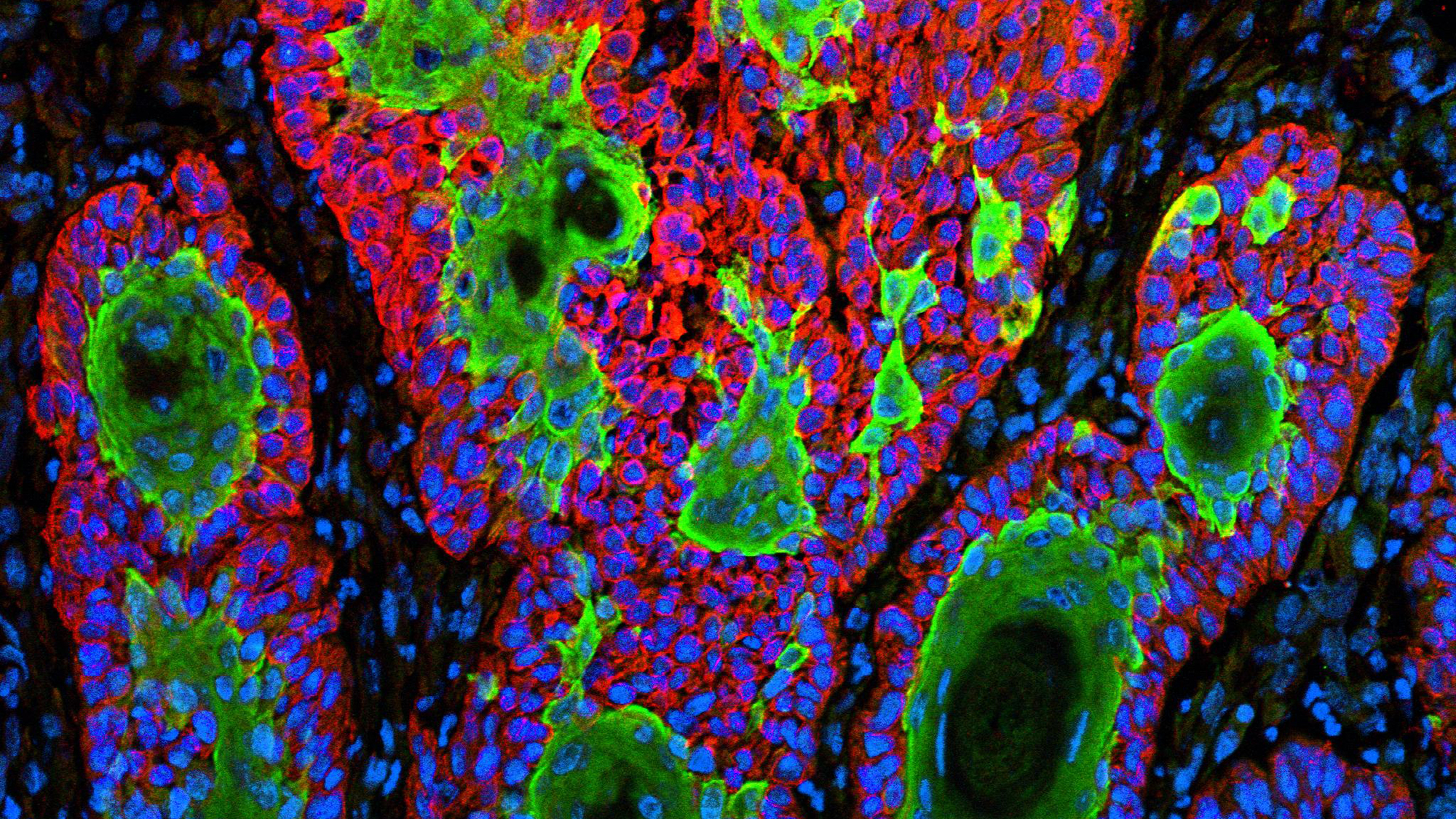 Professor Douglas Lauffenburger is Head of the Biological Engineering Department at Massachusetts Institute of Technology. Nigel Bovey talked to him about his scientific research into cancer, and his faith, which gives his life meaning and helps him to improve the world..

Professor Lauffenburger, how did you get into science?

As a kid, although I enjoyed playing sports, I also loved mathematics and music. My father was an electrical engineer. And I grew to like physics and chemistry. I was fascinated by the way things work. On Saturday mornings, my brother and I used to read encyclopaedias before we were allowed to get up for breakfast.

You now head a university department. What is bioengineering?

Does biological engineering have ethical concerns that other branches don’t? For example, using sand to make glass is one thing but a plan to clone human cells calls for a line in the sand.

Generally, if we can improve health, enhance nutrition and maintain the environment using biological means, that’s a good thing. But there are ethical limits. The likes of reproductive cloning as a means to create a new human being needs an ethical line to be drawn.

Can you foresee a time when human cloning is acceptable?

No. I think the predominant view must and will be that human cloning is definitely beyond where we ought to be going.

Your own area of research is in cancer. What causes cancer?

What are you doing to get the cells to behave as they should?

In the case of molecular regulatory circuits that go wrong because of mutations, we want to find ways to inhibit them and then modify them so that the circuits lead to the right cell behaviour.

Cells are complicated entities. Confronted with a gene mutation, you might think that all you need to do is find a drug against that particular gene product and everything will be well. But that’s not the way it happens. You inhibit here and something happens there. You poke there, something else happens over here.

Is it too early to say that you have had success?

Success in cancer is limited. You try to gain one foothold after another. We have been involved in a number of products that are in various stages of clinical trials.

When can we expect cancer to be curable?

For some forms of cancer, there are already treatments that are effective and long-lasting, at least in a majority of cases. For others, there is essentially no such treatment. At present, it is more the case of medical research being able to increase longevity. So, with some cancers, the chance of a patient living a further five years has risen from 20 to 40 per cent. It is no cure, but it is a major advance.

Is minimising cancer the best we can hope for?

There are two ways of thinking about it. One is for the main goal to be making cancer a manageable disease that can be checked so that people survive longer. The second view is to correct the defective genes.

At present, that kind of genetic therapy is overly optimistic. First, most tumours have multiple mutations so it’s not just a matter of correcting one. Secondly, in biology, even if you correct something, it is not the case that everything resets and becomes unsullied.

Is gene therapy not appropriate for cancer treatment?

In other diseases, gene therapy is seen as the mechanism for replacing a missing function. In cancer treatment, it may be that immunotherapies – boosting the body’s immune response to be more effective in killing tumours – are more effective.

For years, antibiotics have been at the forefront of killing infection. How big a concern is it that a resistance-free supervirus could emerge?

It is a serious worry. There is a lot of research going on in this area – some in finding more classical antibiotics, some in how to enhance the immune response, and some in the genetic programming of bacterial viruses to be antimicrobial.

There are many lethal conditions that deserve attention, including heart disease and HIV/Aids. A vaccine for Ebola had not been developed until the infection had killed hundreds of people. To what extent is the direction of medical research determined by funding?

It is necessarily shaped by funding, because everything in the world is resource-limited. It is one thing to have an idea for a new cure but it is another thing to get the attention that drives funding. There are conditions such as diabetes and endometriosis that have millions of sufferers and cost society through lost capabilities. Yet the amount of research on these conditions is less than for some other diseases. Are they, therefore, less important? No. They just haven’t captured similar attention, not only among funding agencies but also among scientists.

The best way to raise awareness of a need is to work on addressing it yourself and to show that you can make progress on challenging a condition.

A number of scientists promote science not only as the provider of medical remedies but also as the cure-all for society. New atheists argue that science explains every aspect of life and death. Does science have all the answers?

No. I am continually humbled by realising how little we know. Every time we think we’ve learnt and comprehended more, something new opens up and we realise that we’ve barely scratched the surface. For example, for years many people thought that our chromosomes contained ‘junk DNA’ – that only a small amount of the DNA was active. It turns out that this isn’t the case – rather, there are complex regulatory mechanisms embedded in our DNA that we’re only now starting to uncover.

The laws of nature are descriptive – they tell us what happens. But to say that those laws explain how it happens is to be on less firm ground. When I was studying biology, I was told never to ask ‘why?’ Science does not answer the ‘why’ questions.

My parents were Christians, and I was brought up to go to church. When I got to college, I started questioning my faith and the purpose of my life. For a while, I discarded Christianity. Just before graduation, I realised that everything I was focusing on – knowledge and achievement – had become an end in itself. I was trying to become famous, so that I would achieve ‘immortality’ through being mentioned in textbooks. I thought my life would have meaning because somebody remembered what I had done and contributed.

Then I came to realise how ephemeral that was. I started digging into my soul. What did I really believe about the meaning of my life? I turned to the Bible that I still had in my room. As the scriptures say, scales fell from my eyes, the Bible made sense. It explained why the world is as it is. It explained why I behave as I do. It explained what my yearnings, uncertainties and fears are.

The Bible made so much sense that the most sensible thing for me to do was to believe it was true. It wasn’t hard to believe that there was a God who created the universe and everything in it, because I couldn’t come to grips with where else it could have come from.

I believed that God wanted a relationship with humankind but that, because of our self-interest and sin, he needed to find a way to bring us back to him. I believed that God sent Jesus Christ into this world and that, by his death, Jesus gave us a bridge back to God. As scientifically difficult as that was, I concluded that, if God had created the universe, he could certainly have intervened in any way and any point in time that he wished.

Did you need to be convinced intellectually?

Yes, but primarily I had to decide that I needed something beyond what I had – that my life wasn’t complete the way I was living it. That’s as much an emotional and spiritual need as an intellectual one.

My life wasn’t complete. I saw in the Bible that, through Jesus, there was the offer of completeness. As a scientist, I had to ask myself: ‘Is this believable? Is this something I can put my faith in?’ I went through the reasons of why I could. And I satisfied myself that the gospel is credible.

If God created everything and is responsible for the way things operate as described by the laws scientists observe, then I see no reason why he can’t intervene in that way. God created the laws of nature but he is not subject to them.

So you, a scientist who works on the mechanisms of cancer, believe in miracles?

Why does God sometimes not heal somebody with cancer?

The Christian perspective is that our life is not solely about this earthly existence. There’s a kingdom that is partly in this world and partly beyond it. Things that we may see as tragic are not necessarily so when set against eternity.

So, Christianity is a pain-reliever – a way of escaping harsh realities?

No. As human beings, part of what we’re doing here is trying to make life as good and meaningful for one another as we can. But there’s no guarantee that any given measure is going to succeed. One way or another, we are all going to pass from this world. But being fatalistic is not the answer. Not trying to improve the world makes no sense.

But sometimes there’s an injustice in death. People die too young or in great pain. Why does an all-loving God allow this?

I don’t have an answer. The Bible teaches that all creation is groaning to be made right. We can put all human endeavour into trying to improve the world, but it’s not going to be whole and perfect until the coming of the kingdom of God.

The Bible describes humankind as being made in the image of God. What do you understand by that?

It speaks to me of God wanting a relationship with the part of his creation known as humankind.

When you were a student, you linked a sense of purpose with being mentioned in a journal or a textbook. Today, you have your name on more than 300 scientific papers and journal articles. How would you like to be remembered?

My favourite Bible verse is in the parable of the talents, where the master says: ‘Well done, good and faithful servant.’ I’ve always tried to be a good steward of everything with which I’ve been entrusted. I would be thrilled to hear the master say the same to me.

The biggest difference I’ve found since becoming a Christian is in realising that you have an impact on people and not things. I feel best about being a good mentor and encourager to those who know me.

This interview was conducted by Nigel Bovey and first appeared in The War Cry. It is used here with permission. ©The Salvation Army 2017