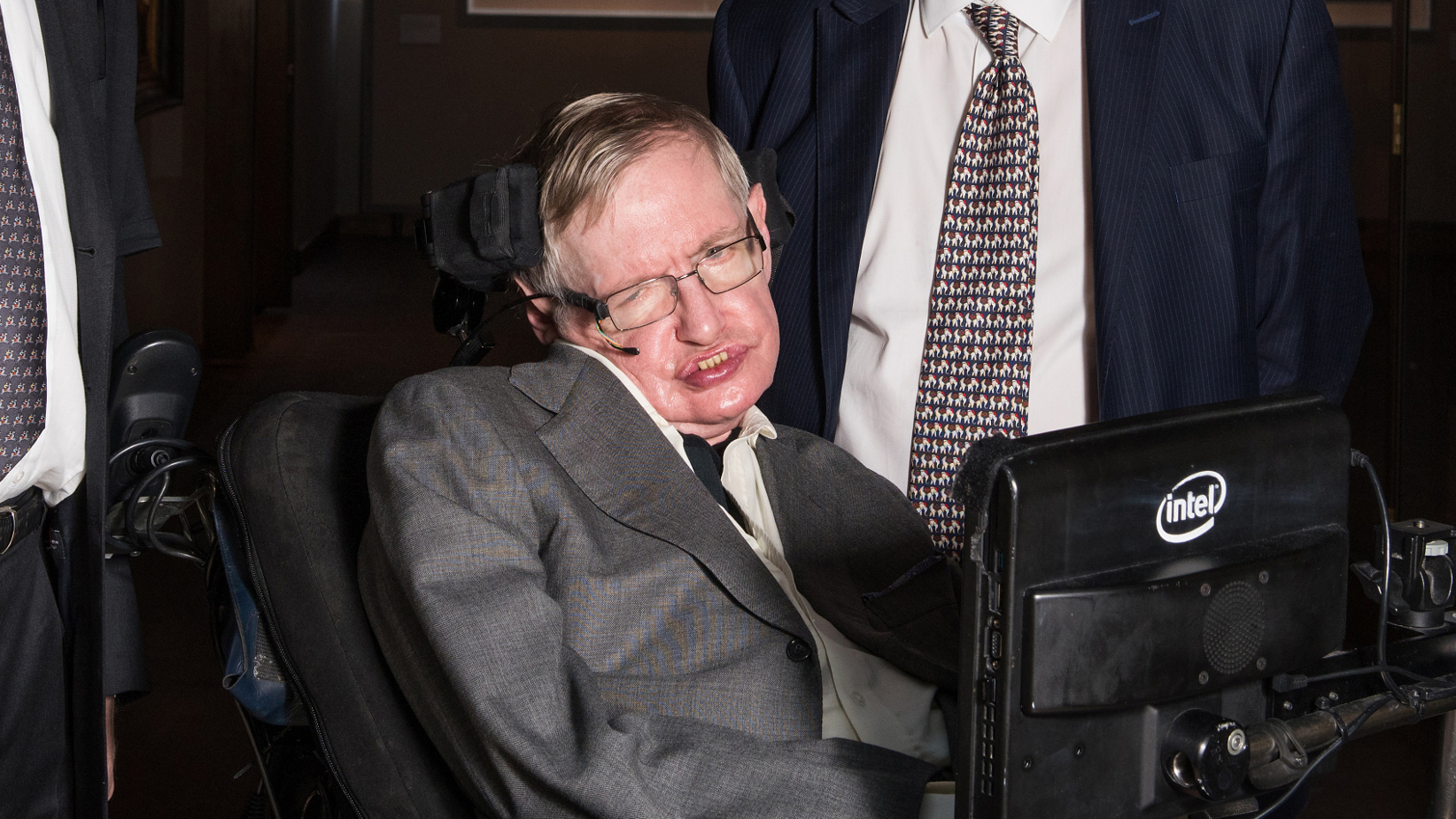 The ashes of the physicist and cosmologist Stephen Hawking were laid to rest in Westminster Abbey yesterday between the remains of Isaac Newton and Charles Darwin. The inscription on his memorial stone echoes the words on the memorial of his new neighbour, Isaac Newton: ‘Here lies what was mortal of Stephen Hawking’, although it also includes, at Hawking’s request, his most famous equation, describing the entropy of a black hole.

Stephen Hawking identified himself as an atheist. In 2014, he explained what he meant when he said (in his book A Brief History of Time) that if we had a complete theory of why the universe exists, ‘then we would know the mind of God’. He said, ‘We would know everything that God would know, if there were a God, which there isn’t. I’m an atheist.’ He also famously said, ‘I regard the brain as a computer which will stop working when its components fail. There is no heaven or afterlife for broken down computers; that is a fairy story for people afraid of the dark.’

Why an atheist should be buried in Westminster Abbey, in a Christian service of worship, was a question asked by many people this week. The Times pronounced that ‘an atheist in the Abbey is a classic fudge’, but the New York Times took the question to the man who made the decision to include Hawking, the Dean of Westminster, Dr John Hall, who took the long view. ‘We buried Isaac Newton here eight days after he died. We also took an immediate decision in 1882 about Charles Darwin.’

Talking about Hawking, Dr Hall said, ‘Whether he was actually an atheist, whether he was actually an agnostic, what his position was, is not, to my mind, entirely clear. My position is quite simply this: Whether a person believes in God or not, if someone is achieving extraordinary things then I believe God is in that process.’ On the Westminster Abbey website, Dr Hall also said: ‘We believe it to be vital that science and religion work together to seek to answer the great questions of the mystery of life and of the universe.’

In the service, which included contributions by academics and the daughter of Stephen Hawking, Professor Kip Thorne, the American theoretical physicist and Nobel Laureate, paid tribute to his friend and colleague, saying, ‘We remember Isaac Newton for answers. We remember Hawking for questions.’ Westminster Abbey has posted the audio of his complete tribute here.

Benedict Cumberbatch, who played Stephen Hawking in the BBC film Hawking (2004), gave the reading at the service, which was from Wisdom 7:15-24, and included the lines:

For it is he who gave me unerring knowledge of what exists,
to know the structure of the world and the activity of the elements;
the beginning and end and middle of times,
the alternations of the solstices and the changes of the seasons,
the cycles of the year and the constellations of the stars…
I learned both what is secret and what is manifest,
for wisdom, the fashioner of all things, taught me.

The address was given by the Astronomer Royal, Lord Rees, who directly addressed the question of science and religion:

‘When Darwin died in 1882, the President of the Royal Society wrote to the Dean of Westminster saying, “It would be acceptable to a very large number of our fellow countrymen of all classes and opinions that the illustrious countryman, Mr Darwin, should be buried in Westminster Abbey.” And so he was, despite not being a believer. Indeed, Darwin wrote, “I feel most deeply that religion is too profound for the human intellect. A dog might as well speculate on the mind of Newton. Let each man hope and believe as he can.” Stephen described his own scientific quest as “learning the mind of God”. But this was a metaphor. He shared Darwin’s agnosticism, but it’s fitting that he too should be interred in this national shrine. His name will live in the annals of science. Nobody else since Einstein has done more to deepen our understanding of space, time and gravity. Millions have had their horizons widened by his books and lectures, and even more worldwide have been inspired by his unique example and achievement against all the odds.’

Professor Brian Cox tweeted after the service: ‘A wonderful moment yesterday: sitting in the Abbey debating with members of the congregation whether it would have been marginally better for the equation on Stephen’s memorial stone to be S = A k c^3 / 4G(hbar) rather than T = (hbar)c^3/8(pi)GMk. And that’s why I love physics.’

The astronaut Tim Peake also tweeted: ‘A very special service today to celebrate the extraordinary life of Professor Stephen Hawking. “Remember to look up at the stars and not down at your feet.” SH.’ During the service, Tim Peake read an extract from the poem ‘Queen Mab’, by Percy Bysshe Shelley.

It’s become almost obligatory for some brands of religious believer to manufacture claims that famous atheists have converted on their deathbeds. It happened to Charles Darwin and Christopher Hitchens, and it’s also happened to Stephen Hawking. More seriously, it’s also been asked whether Hawking’s final scientific paper, which radically simplifies the multiverse hypothesis, might have accidentally strengthened the case for God.

So perhaps the last word should go to Hawking himself, who does not seem to have moved much from the view he expressed in 2011 on an American television series: ‘We are each free to believe what we want, and it is my view that the simplest explanation is there is no God. No one created the universe and no one directs our fate. This leads me to a profound realisation. There is probably no heaven, and no afterlife either. We have this one life to appreciate the grand design of the universe, and for that, I am extremely grateful.’