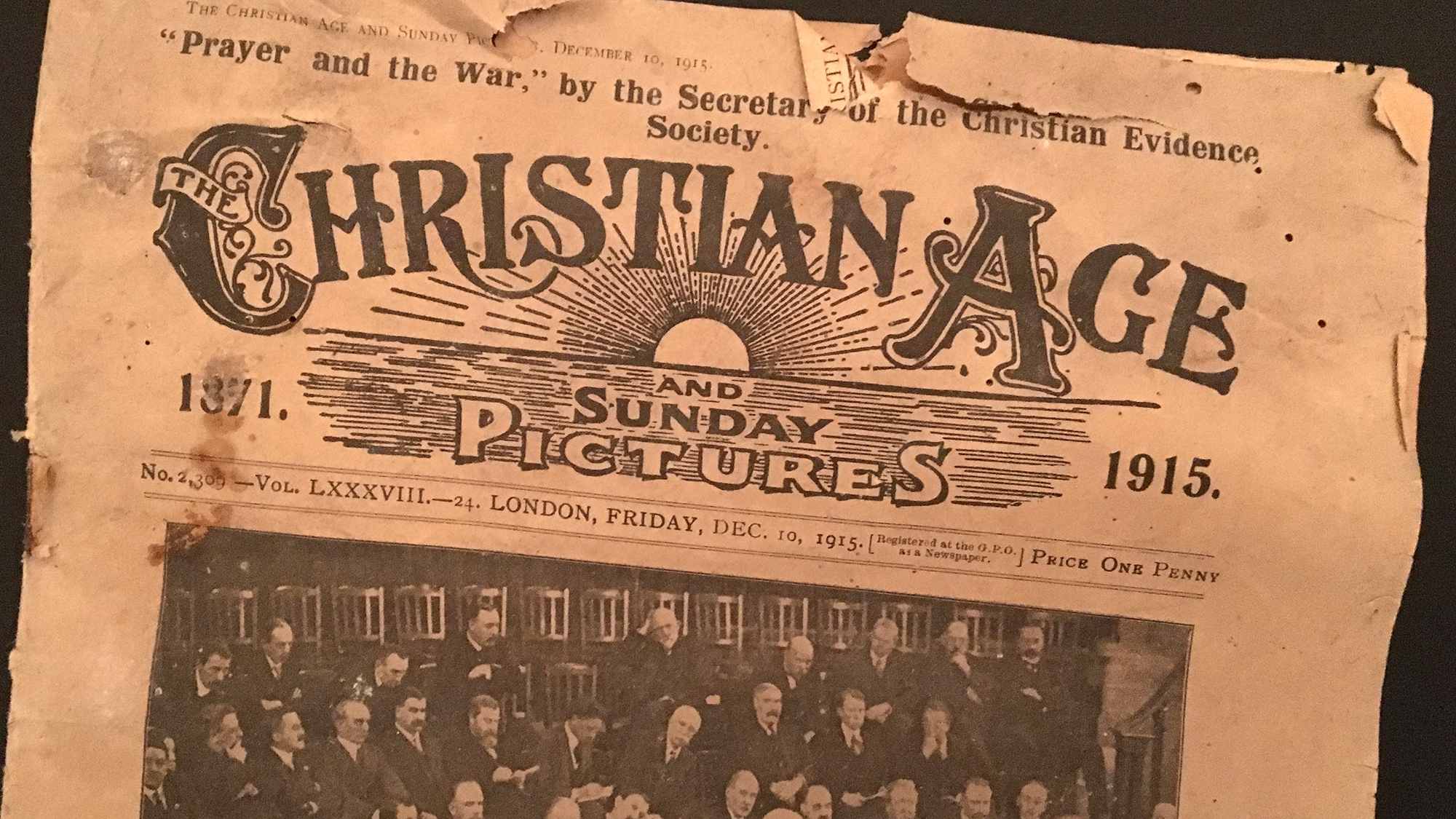 An ancient copy of a long-forgotten religious newspaper from the time of the First World War, which was recently sent to us, reveals attitudes towards prayer and ‘this terrible war’.

We recently received a rather battered copy of a religious newspaper, The Christian Age, just over a century after it was published. The copy had languished in the loft of a house in St Kevenrne, Cornwall, until the house’s current owner, Jim Dowling, came across it while the loft was being renovated. The newspaper, which was published in December 1915, at the height of the First World War, is a time capsule of Edwardian news and comment, with one article sharing the secret of staying warm in the winter weather. ‘According to Arctic explorers, anything containing fat, such as chocolate, butter, or bacon, is a fine heat-promoter.’

The leading article was written by the Secretary of the Christian Evidence Society, which is how Jim Dowling came to find out if we still existed, 100 years later, and then send the newspaper to us. We’re very grateful to him for it.

The article, ‘Prayer and the War’, was written by Rev. Robert Venn Faithfull Davies (pictured above), and reveals the attitudes of the time towards faith and the conflict. Faithfull Davies writes: ’The war has given a tremendous impetus to prayer. The testimony of those who have gone forth to fight for us is, I think, pretty unanimous. Men are praying there who have never prayed before, or who perhaps have forgotten even the very way of praying, or who have of set purpose ceased to pray. Out there, they have come face to face with realities, and there is an immense volume of prayer going up.’

Faithfull Davies had direct experience of the realities of the war. His son Gilbert was in hospital as he wrote, after having his arm shattered on the Western Front near Loos, in Flanders. Gilbert returned to the front a year later, and was killed leading an attack on the German lines at Arras in April 1917.

Questions about the credibility of prayer were prevalent during the war, and the majority of Faithfull Davies’s article speaks to this issue. He says: ‘Now there is a difficulty, which seems to be a very considerable one to some minds. It is this: They say, “Yes, there is an immense amount of prayer going up from England, the Allied countries and the Colonies, an immense volume of prayer asking for victory for our arms. But there are praying men and women amongst the Germans, too, and they are praying that victory may come to them!”’

He argues that one of the keys to understanding Christian prayer are the four famous words Jesus addresses to God in the Lord’s Prayer: ‘Your will be done’. True prayer, says Faithfull Davies, is offered in the belief that God ultimately knows what is best for us, even when our prayers don’t produce the result we hoped for.

He says: ‘Supposing there are two people asking for quite opposite things – a Godly German, asking success for German arms, and a Godly Englishman asking for the success of the arms of the Allies, and they each of them have in their hearts the necessary conditions, “Thy will be done,” then there is no reason why they should not go on praying, and leave it to God to give the answer which He knows to be best.’

He concludes: ‘Let us go on praying, commending our dear ones to His care and keeping, praying that our nation may awake, that it may learn the lessons that God has to teach it in this terrible war.’

Robert Venn Faithfull Davies was Secretary of the Christian Evidence Society from 1902 to 1916. He was the great-great grandfather of Marianne Faithfull, the English singer, songwriter and actress.

Photograph of Rev. Faithfull Davies used by permission of a member of the Faithfull family