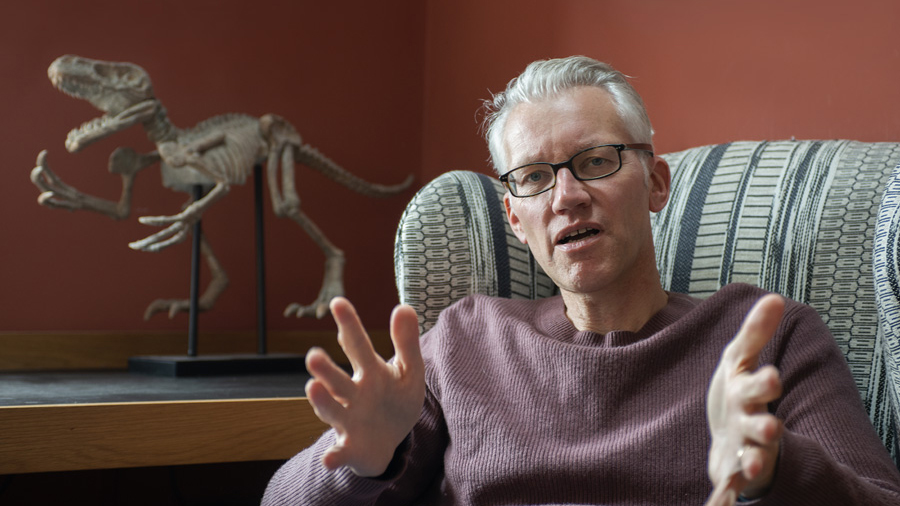 Tom Holland, the historian who has written books on Rome, Persia, the rise of Islam, and most recently the 2,000 year story of Christianity, is the subject of a new interview, ‘The Power and the Glory’ on the High Profiles website.

Holland reveals that he grew up with a childhood faith in Christianity, although his early love of icthyosaurs and triceratops made him feel keenly the lack of dinosaurs in the story of the Garden of Eden. He has described the loss of his early faith as being like a dimmer switch turned down.

‘I had a kind of synesthetic approach to history. I would think of ancient Athens and imperial Rome as a deep blue sky and the sun, you know, glinting off temples; and it would be rich and sumptuous. And when I thought of the coming of Christianity, I thought of a gloomy autumnal day, like going to school after the long summer holidays… By the time I was 20, I had just kind of imbibed this Enlightenment take that Christianity had come along and ruined everything.’

In the interview, Holland talks about his fascination with history, and also about the Channel 4 documentary he made in 2017 about Isis, during which he came face to face with extreme violence. ‘Isis could have come and grabbed us at any minute,’ he says. During that time, he was already writing Dominion, which traces the enduring impact of Christianity on the West. The irony, he says, is that as we in the West have broadly rejected the Christian faith, our instincts have remained deeply Christian.

’As Western power retreats, we’ve come to realise that these values that we had assumed were universal – human rights, the inherent dignity of Man, the obligation of the rich to the poor – are actually very culturally contingent. Our assumption that there are universal values is itself very culturally contingent – and specifically Christian, I think. I can find no basis for believing in any of this stuff at all that does not involve a conscious leap of faith.’

In 2016, Holland wrote a piece in the New Statesman, ‘Why I was wrong about Christianity’, in which he said that ’it took me a long time to realise my morals are not Greek or Roman, but thoroughly, and proudly, Christian.’ He now goes to one of London’s oldest churches, where he sometimes thinks that he’s simply seeing some fascinating piece of history and culture at work, but at other times thinks, ‘This is the key to why I think the way I do. Perhaps I just need to stop overthinking it.’

Read the complete interview on the High Profiles website.