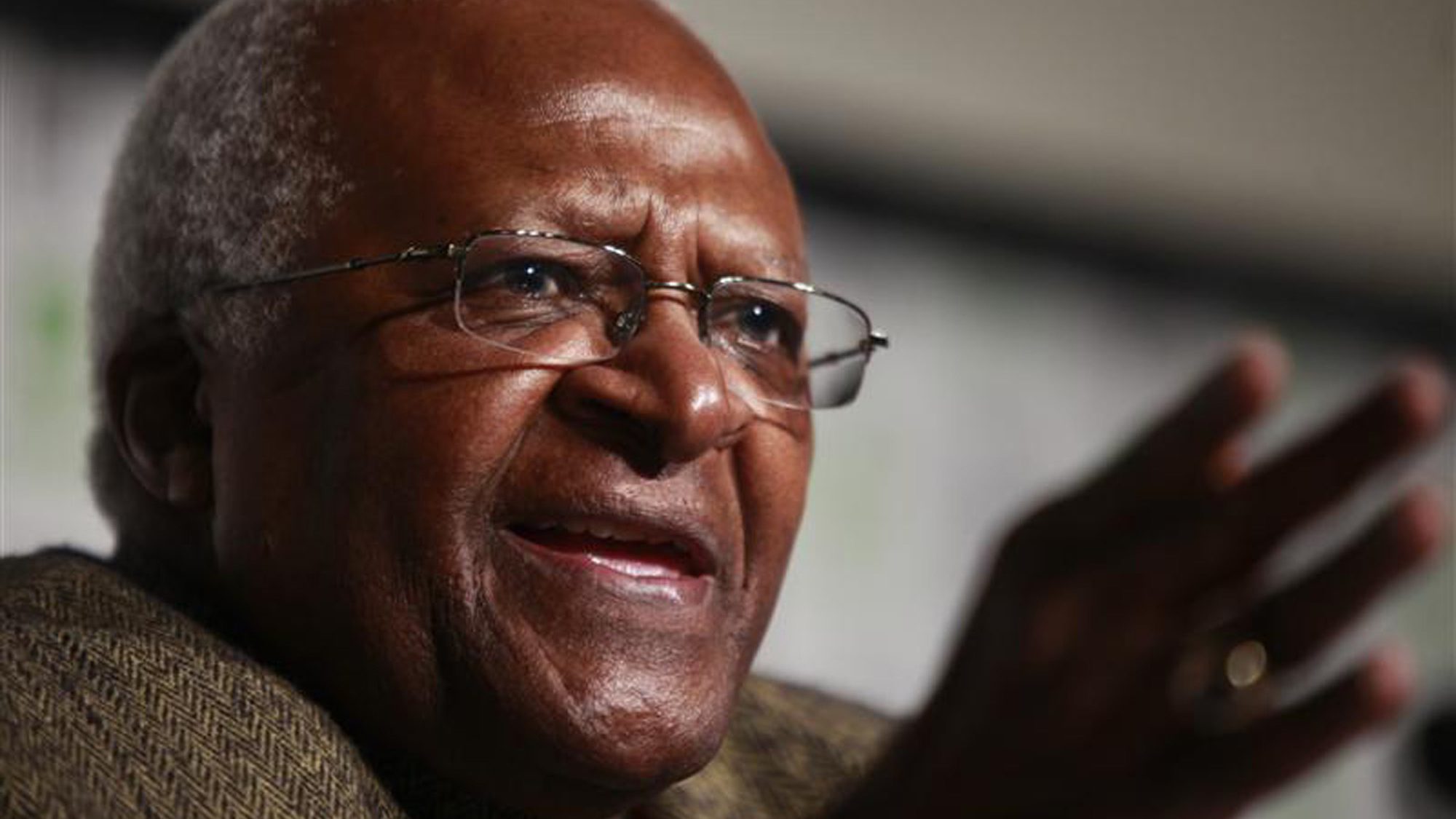 The biblical scholar and social commentator Richard A Burridge, who as Dean of King’s College London knew and worked closely with Desmond Tutu, offers this memoir about the former Archbishop of Cape Town who died in December.

Ever since the current Archbishop of Cape Town announced the death of Desmond Tutu early on Boxing Day, the many tributes being paid often begin with words such as activist, campaigner, protester, fighter or opponent. And then they go on to a whole list of issues and -isms, such as apartheid, racism, sexism, campaigning against oppression on grounds of colour, gender, age, sexual orientation, or for basic human rights, or the liberation of oppressed black and coloured South Africans, women, LGBTQ – and continuing with the right to die and assisted suicide, since his own supportive statement of 2016. While these are all true, sometimes it seems as though Desmond Tutu has become a blank screen upon which anyone can project their own issues, passions, pains or concerns.

Yet these popular descriptions miss the heart of the person that I knew over more than four decades, someone who insisted on ‘being’ before ‘doing’, contemplation before action, or who said he wanted to be a ‘quietist’ more than an activist. When first trying over 40 years ago to arrange his daily schedule, I quickly learned that he needed to spend hours in silence and prayer before he could speak, in ‘taking in from God’ before ‘giving out to people’, in thought and contemplation before campaigning or making pronouncements.

Over these years, never a year went by without at least me making one visit to the Archbishop, whom I quickly learned to call ‘Father’ in the traditional but simple respect for the priesthood. Whenever we met, the first thing he would do (after enveloping me in a bear hug) was to insist on joining together with him in a prayer before talking.

The same was true of any journey with ‘the Arch’ in a car or taxi; after the driver got over the shock of seeing in the rear-view mirror who his famous passenger actually was, would come the regular request – ‘please, before you start driving, let us pray – for care, for safety, and for others on the road’.

This combination of joy, genuine affection and deep spirituality has characterized all my dealings with Archbishop Tutu.

I first met him in person in May 1990. I became Chaplain to Exeter University in the late 1980s, and immediately tried to invite Archbishop Tutu to come and give a special lecture on his belief in God’s ‘moral universe’ – but for years the political authorities refused him a passport. When he was finally able to come to Britain, it turned out his visit would be on the same day as the first formal face-to-face negotiations of Nelson Mandela and the ANC with President FW de Klerk and the apartheid government back in South Africa.

Suddenly, this catapulted him to the top of Britain’s security list, lest any incident with him here might jeopardize the peace discussions back home. At London Heathrow, the early morning plane was kept ticking over and passengers still seat-belted while armed police brought him and his wife, Leah, to meet me in VIP security for immigration. Despite his insistence on the priority of the Eucharist, there was no time for it as we raced in armoured cars to Reading Station where the train was (inevitably) delayed.

When we finally got on board, the poor steward who asked me for our breakfast order was confused when I asked for a small bottle of red wine and a slice of bread as soon as possible. ‘Bread for everyone?’ ‘No, one piece of bread.’ ‘Shall I cut it up for you?’ ‘No, the Archbishop will break it.’ And his final despairing attempt to help: ‘Would the Archbishop like it buttered?’! As we celebrated Holy Communion with police protection at 125 mph, I marvelled at this mixture of spirituality and modernity as the Lord was present to us in the Eucharist and prayer for the state of the world.

During that first visit, I was amazed by Tutu’s stamina, his joy, his ability to give totally of himself in his public speaking and his personal conversations – but with the unseen but constant need also to withdraw, to be quiet and to pray. I witnessed how the public life was sustained by his spiritual discipline.

After being involved with his retirement as Archbishop of Cape Town in 1996, I was invited to spend a couple of months in Cape Town with Archbishop Tutu while he was chairing the Truth and Reconciliation Commission in 1998. I was undertaking research on his theology for a book about how the Bible was used under apartheid. His commitment to the principle of ‘justice’ for all is well-known, regardless of race, colour or the ‘shape of their nose’ (his frequent example to provoke laughter at his own expense – although he also used this example seriously in Rwanda, where Hutus and Tutsis have different shaped noses).

An essential commitment to the biblical principle of the love of God for everyone, regardless of status, colour, race, gender, age, orientation, or even ‘the shape of their nose’ is constantly there in Tutu’s beliefs and message right from the start. He has often told me the story of being an eight year-old urchin on the streets of Sophiatown (outside Johannesburg) who was amazed to see a young priest in a soutane ‘doff his wide-brimmed clergy hat to my mother’. That a white Englishman could wish his beloved mum, ‘Good morning, Madam’, had a huge impact on the young Tutu, giving him that ‘sense of the unique worth of a person as a beloved child of God’.

It is this basic but iron-clad belief which enabled Desmond Tutu not just to survive the beatings, tear-gassings, insults and other extraordinary pressures, but to go on declaring and demonstrating to others the love of God for everyone, a love which he renewed through the basic principle that each day must begin with prayer and meditation, worship and the sacrament.

I remember one morning we were celebrating the daily Eucharist with his team at the offices of the Truth and Reconciliation Commission, when lawyers from P.W. Botha arrived with a legal writ for Archbishop Desmond. He just carried on with the liturgy – while John Allen, his public relations adviser took them aside to explain that ‘God was more important to the Arch’ – and whatever divine aspirations P.W. might have, they would just have to wait.

In 2004, I hosted Archbishop Desmond and Mama Leah for three hectic months at King’s College London, during which I chaired a three-way dialogue between Archbishop Desmond and the Chief Rabbi of Great Britain, Jonathan Sacks, and the Archbishop of Canterbury, Rowan Williams. Archbishop Rowan and the Chief Rabbi carefully picked their way through the various ‘minefield’ questions that their staff preferred us to avoid but, sitting between them, Archbishop Desmond threw caution to the winds, asserting his basic belief in ‘the unique worth of everyone as God’s children’ with his typical humour and great enthusiasm. At one point, he suddenly threw his arms wide open to demonstrate the universality of God’s love, shouting ‘God loves ALL!’ – only to knock his distinguished dialogue partners clean off their chairs.

Desmond Mpilo Tutu was a man who had seen great sorrow and suffering, both of his beautiful yet torn and divided land, and in his own illnesses and persecutions. Yet he remained always a person of great joy, humour, encouragement – with irrepressible laughter and the ever-constant hug and a smile, but always rooted in prayer and the sacrament. In this very special child of God, the divine combination of inward retreat and outward activity, of prayer and politics, of suffering and joy, of tears and laughter, was brought closer to perfection than in any other human being I have met, a mix of spirituality and humanity which made it a joy to be able to call Tutu, ‘Father’.

The Rev’d Canon Professor Richard A. Burridge is an internationally respected biblical scholar, author, priest and social commentator, who was Dean of King’s College London 1994-2019.

An edited version of this tribute is available at The Spectator. Richard Burridge’s complete tribute to Desmond Tutu is available here. This extract is used by permission