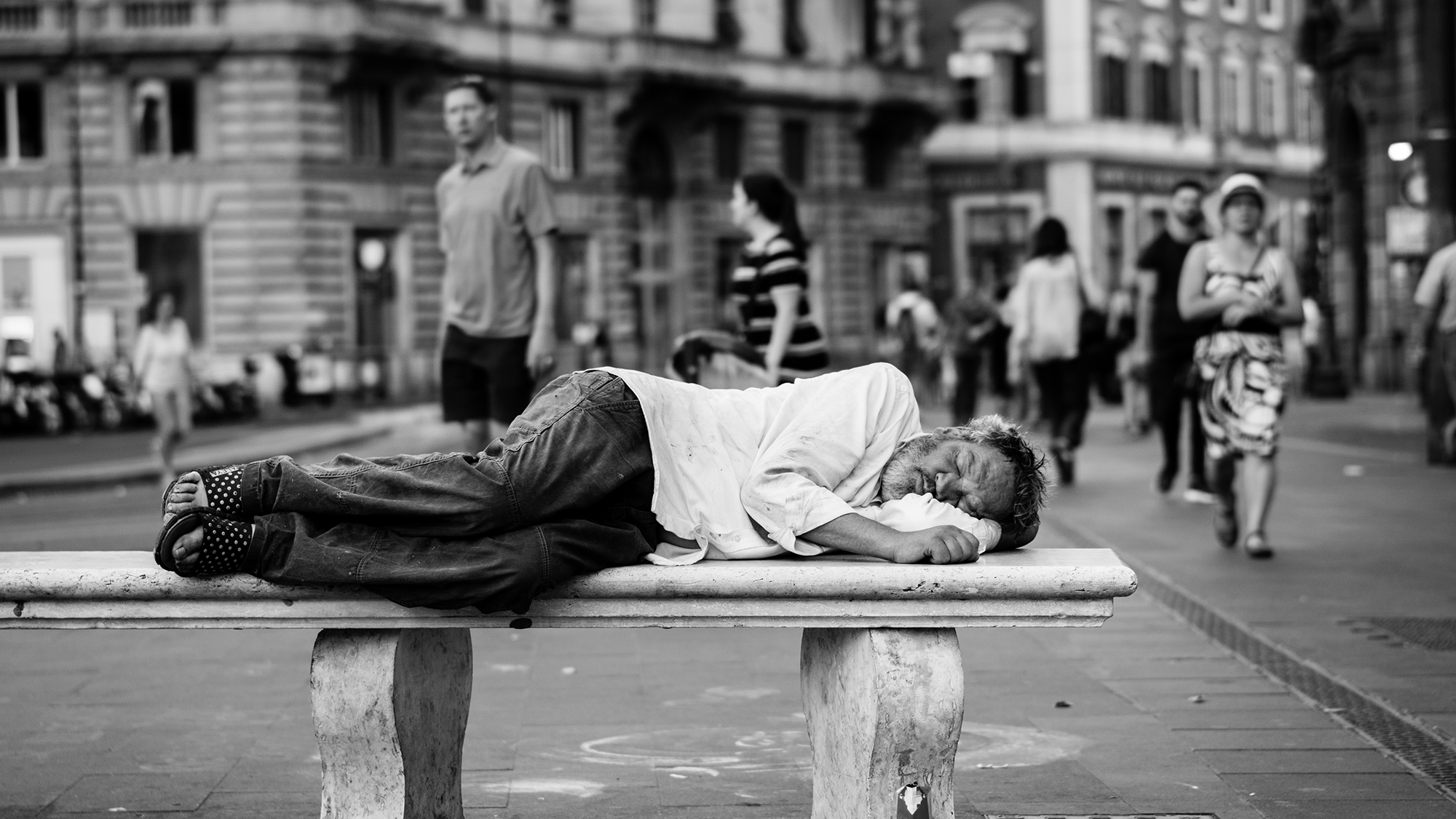 The issues of poverty and wealth have been taxing the minds and actions of people all around the world for centuries. Poverty seems to exist in all cultures and through the various histories of our world. Whether in the Mayan communities of Central America, the Khmer civilizations in south East Asia (modern day Cambodia) or indeed our own Norman and Saxon tribes, poverty has existed alongside wealth.

Today a trip to any one of the world’s modern and bustling cities reveals these same divergent cultures. We only have to observe the street children in San Paulo Brazil, or those sleeping rough in London or any of our big cities to know that poverty exists. The campaign Make Poverty History in 2005 aimed to ensure that the leaders of the world’s richest nations acknowledged the plight of the poor and promised to ‘Act Justly’ on their behalf.

When Christians look at issues like this, a number of questions occur to them about their responsibilities. For example, what should Christian commitments be to those who are suffering as a result of poverty and hardship? And does the Bible have anything to say about a Christian’s responsibility towards those who are not Christians, and who suffer?

Christians don’t have to answer these questions simply from human ethics, but biblical revelation gives clear direction. Whether we turn to the prophets, the teachings of Jesus, or the letters of the apostles, we see the challenge to take issues of our responsibilities to the poor very seriously and act accordingly.

Christians down the centuries have been in the forefront of the fight against poverty and injustice. Among the most celebrated for their work in these areas are William Wilberforce, Thomas Barnardo, William Booth, Martin Luther King, Mother Teresa and Desmond Tutu. In addition, millions of Christians, who have not become famous, have contributed, by working individually or through church organisations, to improving the lives of other people. In this they have been motivated by their Christian faith, inspired by the life and teachings of Jesus.

Jesus always treated those who were poor with dignity. In St Luke’s Gospel, chapter 6, verse 20, he said, ‘Blessed are you who are poor, for yours is the kingdom of God.’ Later in the same chapter, in verse 24, he says, ‘Woe to you who are rich, for you have already received your comfort.’

On another occasion, in the Temple in Jerusalem, (see St Matthew’s Gospel, chapter 12, verses 41 to 44) Jesus criticised wealthy people for making a great show of the amount of money they were giving to God; he commended a poor widow who, whilst giving just a small amount, was giving sacrificially and in a way which meant much more to her. They gave out of their wealth; but she, out of her poverty, put in everything – all she had to live on.

While never criticising wealth or money in themselves, Jesus nevertheless observed that rich people were more likely to put their wealth before their commitment to God. He is in no sense condoning poverty, but is saying that wealth, among many other things, can prevent people from putting God first in their lives.

Justice for all – In Isaiah chapter 58 God criticises his people for not practising their religious beliefs and responsibilities. They were praying and fasting (going without food), yet God tells them that they are a million miles from living as he wanted them to. God says: ‘This is what I call a fast: to share your bread with the hungry, release the burdens of the people and seek justice in all your transactions.’ (See verses 6 to 7).

All too often we think of those who suffer as the victims of geography or circumstance, but from a biblical point of view, circumstances are never simply neutral and human sin becomes embedded in the way societies operate. Sins like greed, manipulation or selfishness can influence the ways in which, for example, we in affluent societies trade with other countries.

Compassion and support for all Christians – In 2 Corinthians chapter 8 St Paul also offers Christians a clear model when, in this letter to the Christian church in the city of Corinth, he tells them that he wants to test the sincerity of their faith. His goal is that those who are able will show compassion to those who are struggling, and, as a result the whole Christian community will grow and be supported.

Today, Christians are to see their responsibilities towards other Christians as a global, not just a local concern. St Paul says that the core example of giving is Jesus himself, ‘who though he was rich, yet for your sakes he became poor.’

God’s love for all – In St Matthew’s Gospel, chapter 20, verses 1-16, Jesus tells a parable about a vineyard owner, who chooses to be generous to the workers who arrive last. The vineyard owner represents God in the story. It is an amazing parable which has layers of meaning including the theme of justice and mercy.

The people who have no work, whom no one has chosen, are like all the vulnerable and disadvantaged of our world. They have no other means of livelihood, but they still have needs: children to feed, bread to provide. By the final hour of the day they would have been desperate: the great exploitable army of workers who will now work for anything rather than go home empty-handed.

But unlike so many in our contemporary world, the vineyard owner does not exploit them, but instead bears the cost of their labour himself. The vineyard owner shows them not merely justice, but illustrates the mercy, generosity and love of God. The challenge is for Christians to do likewise.

These themes run all the way through the Bible. The needs of the poor, the widows, the orphans, foreigners, the sick and the elderly are seen as requiring the serious attention from the rest of the community, not just a nod and a small gift. Today we know that at least 1,500,000,000 people across the world will go without the basic necessities of life. The need for action is great, and the call to ‘Act Justly’ is as strong a requirement on Christians in the twenty-first century as it has ever been.

How then do we understand the Christian call to act as a result of this information gleaned from the Bible? For the Christian, some words from the Book of Micah, chapter 6, verse 8, are a real clarion call to action: ‘And what does the Lord require of you? To act justly, to love mercy and to walk humbly with your God.’

It is this that drives Christians all around the world to respond to the needs of the poor. Not from guilt, or because of God’s command, or from a humanitarian perspective, all of which are valid reasons, but from their relationship with God and with other people: they have to see themselves as being ‘God’s hands and feet’ as they serve other people.

Christian see their beliefs as having a transforming impact, as money, time and skills are used to help the poor to rise above poverty. There must never be a separation between beliefs and social action: the two are integral to each other. From the Christian’s belief in God and in the significance of God’s creation flows a concern for God’s world.

Christian aid organisations and local churches are active in all continents in such fields as education, agriculture and HIV/AIDs projects. A former UK government minister has gone on record as saying that, in the fight against poverty across the world, it is the faith-based NGOs through whom money and skills are best channelled, as they are the organisations which can act locally and with high levels of integrity.

Poverty will always be with us in one form or another. It requires the commitments of Governments, businesses, local communities, faith groups, and others to act justly, and to act with integrity. In the twenty-first century we have the ability, the capacity, and the resources to reduce vastly the ravages of poverty. The big question is do we have the will?

What can be done?

How then can we help in practical, sustainable ways to raise people out of poverty? We can on one level lobby governments and officials to protect vulnerable people. On a local individual level, we can, through aid organisations, give people skills to earn a sustainable income and to give people, especially women and children, access to education.

An example of such support can be seen in the work of Tearfund partner The Cambodian Hope Organisation (CHO). They fund the establishment of small businesses and a sewing centre to provide income. By improving agricultural techniques, the organisation plans to help 450 families to provide their own food and earn some extra income.

They also offer vocational training for teenagers, helping them to build a positive future. CHO also raises awareness of child exploitation by training teachers and village authorities, who then pass these important messages to children. A karaoke video and role play are used to teach children in fun ways how to keep themselves safe from traffickers.

These initiatives, just a few examples of countless Christian aid projects around the world, contribute to lifting families out of poverty and so make both children and their families less vulnerable.

‘And if you spend yourselves in behalf of the hungry and satisfy the needs of the oppressed, then your light will rise in the darkness, and your night will become like the noonday.’ Isaiah chapter 58, verse 10

‘Do not go over your vineyard a second time or pick up the grapes that have fallen. Leave them for the poor and the alien. I am the Lord your God.’ Leviticus chapter 19, verse 10

‘There will always be poor people in the land. Therefore I command you to be open-handed toward your brothers and toward the poor and needy in your land.’ Deuteronomy chapter 15, verse 1

‘Jesus answered, “If you want to be perfect, go, sell your possessions and give to the poor, and you will have treasure in heaven. Then come, follow me.”’ Matthew chapter 19, verse 21

‘All they asked was that we should continue to remember the poor, the very thing I was eager to do.’ Galatians chapter 2, verse 10

A meditation from Isaiah chapter 58

To loose the chains of injustice,
To set the oppressed free,
To share your food with the hungry,
To provide the poor wanderer with shelter.
If you spend yourselves on behalf of the hungry
and satisfy the needs of the oppressed,
then your light will rise in the darkness
and your night will become like the noonday.
The Lord will guide you always.
He will satisfy your needs in a sun-scorched land
and will strengthen your frame.
You will be like a well-watered garden,
Like a spring whose waters never fail.
Your people will rebuild the ancient ruins
and will raise up the age-old foundations.
You will be called ‘Repairer of Broken Walls’,
’Restorer of Streets with Dwellings’.

The following organisations and websites contain information and other links that will aid further and deeper study.