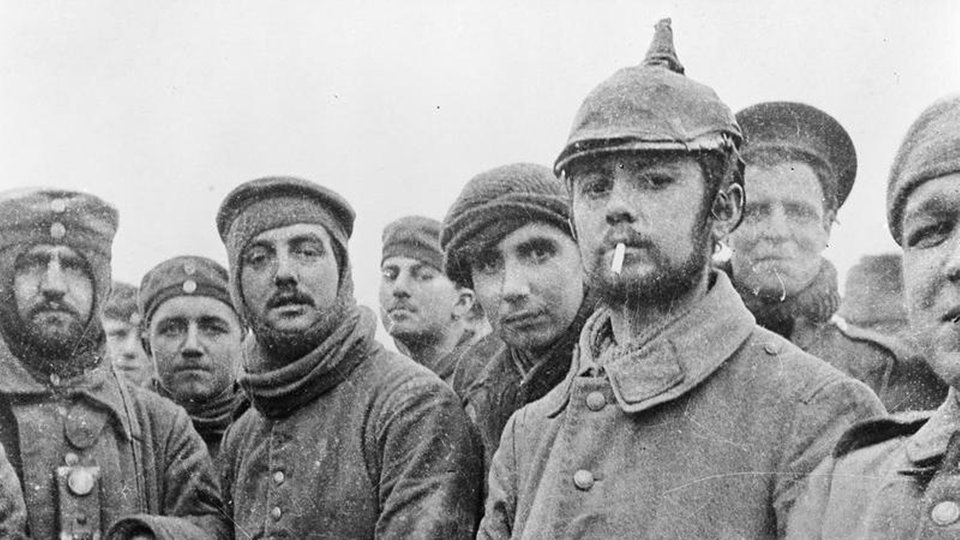 Christmas 2018 saw the 200th anniversary of the carol Silent Night. Martin Clarke, Lecturer in Music at The Open University explores its musical and lyrical content, as well as its key role in the Christmas truce on the Western Front in 1914.

Few Christmas carols evoke the season of peace and goodwill as readily as Silent Night. Two popular stories contribute to its appeal: one concerning the circumstances of its composition in Oberndorf, near Salzburg in Austria, and the other its role in the Christmas Truce of 1914 when the opposing forces walked out of their trenches to greet their enemies and share food and drink.

But its lyrical and musical content are also important factors in understanding its enduring popularity, and Christmas Eve 2018 marks the 200th anniversary of its performance.

Together with the centennial commemoration of the end of World War I, this Christmas seems an appropriate time to consider the appeal of this much-loved carol.

Joseph Mohr (1792-1849), the assistant priest in the parish of Oberndorf, wrote the original German lyrics of Stille Nacht! Heilige Nacht! in 1816. Mohr had previously served in the Napoleonmic Wars and his experiences in Austria around the time of the withdrawal of Bavarian troops undoubtedly influenced the composition of the text. The music was subsequently composed by the parish organist in Oberndorf, Franz Xaver Gruber for use at a Christmas Eve service in 1818. The church’s organ was apparently out of action, leading Gruber to compose his setting for two voices with guitar accompaniment.

While Gruber may have been responding to an unexpected situation at short notice, the existence of Mohr’s text indicates that some accounts of the carol as a last ditch collaborative solution have been somewhat embellished. But the exact historical record of the carol’s genesis are not the most important matter here, however. Rather, it is the sense of homely resourcefulness that the story conveys that is important to the way in which Silent Night has subsequently been viewed and appreciated.

Whether there is something about the carol’s makeshift origins that resonates with the Nativity story itself, or simply the greater sense of intimacy created by the use of the guitar, a rather more domestic instrument than the church organ, the stories of the carol’s origin invest it with a folksy quality that contributes to its popularity.

The content and careful craftsmanship of Mohr’s lyrics are important factors too. The same line, “Stille Nacht! heilige Nacht!” (Silent night, holy night) opens each of the six verses, an effective rhetorical device that creates and maintains a tone of quiet mystery throughout the text.

Across the six verses, Mohr juxtaposes traditional imagery of the peaceful newborn baby resting on his mother’s breast with simple statements that reflect the profundity of his birth in Christian doctrine. The third stanza meditates on the divinity of the Christ Child and the mystery of the incarnation, while the fifth explores the work of God the Son in bring salvation from sin.

English translations first appeared in the 1850s, and new versions continued to be published well into the 20th century. Most translate only three of Mohr’s six stanzas – and this shortened form has also become the standard in German-speaking countries. Modern hymn books continue to use a variety of different translations, but from the many different versions of the opening line, “Silent night! Holy night!” has become the most widely adopted.

Gruber’s music enhances the folk-like qualities of the carol. The melody is set in compound time, that is, with each beat subdivided into three parts. This allows for the frequent use of a three-note dotted rhythm pattern (first heard on the first word: “si-i-lent”), which – together with simple and slow-moving harmonies – helps to create a pastoral atmosphere. These are commonly-used features, often likened to the sound of a shepherd’s pipe, and can be found in many compositions associated with Christmas.

Two of the best-known examples are the Pastoral Symphony from Handel’s Messiah, which sets the scene for the shepherds, and the Sinfonia at the beginning of Part II of JS Bach’s Christmas Oratorio. The gentle downward contours of all but one of the melodic phrases also contribute to the subdued character of the music; the contrasting penultimate phrase responds to the sense of hope and joy in Mohr’s text, while the final descent underlines the atmosphere of calm and security of Gruber’s musical interpretation.

At least as famous as the story of the carol’s origin is that of its role in the Christmas truce of 1914. In his book on the truce, historian Stanley Weintraub identifies the singer as Walter Kirchhoff, a German Officer and sometime member of the Berlin Opera. Kirchhoff’s singing of the carol in both German and English is credited with encouraging the exchange of songs, greetings and gifts between the opposing soldiers.

While there is debate among historians about the nature and scope of the truce, Silent night is firmly established in popular imagination as the soundtrack for this remarkable event, as shown by its use in a supermarket television advert in 2014.

The contrast between the carol’s message of tranquillity and hope and the violence of war is obvious and compelling, but the intimacy and simplicity of Gruber’s music is important too in providing an antidote to the grimness of trench warfare.

The depth of significance attached to Silent Night is summed up its inclusion on UNESCO’s intangible cultural heritage list in 2011. Words, music and contextual narratives combine to create its aura and reputation, making it one of the most striking examples of the ways in which musical associations shape our experiences of the Christmas season.

This article is republished from The Conversation under a Creative Commons license. Read the original article.